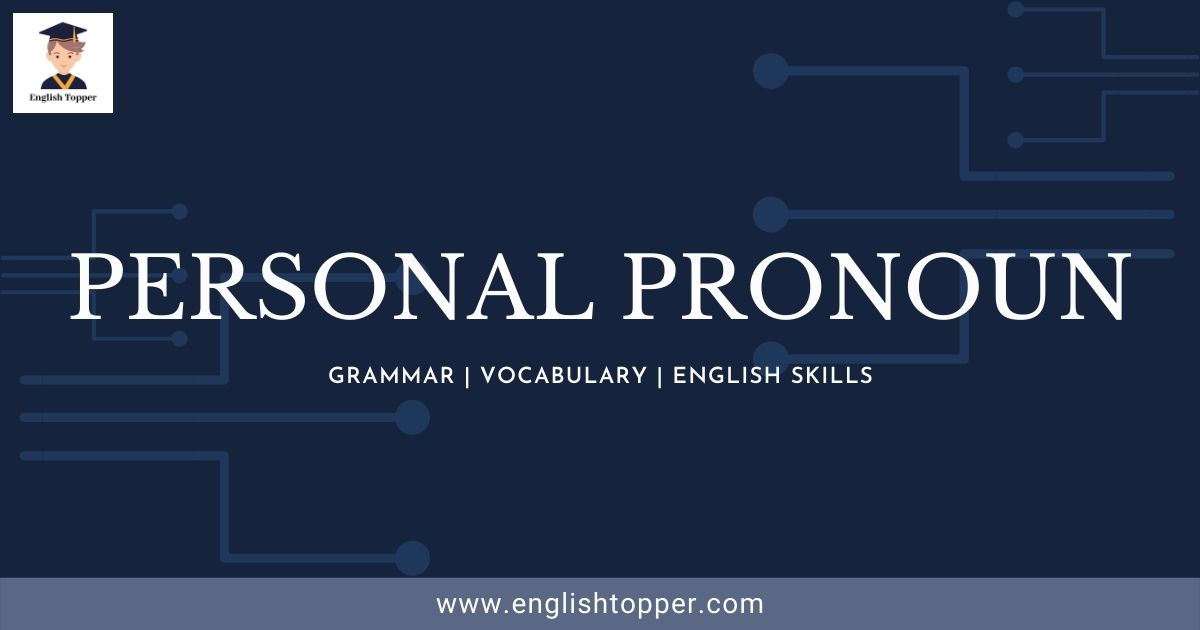 What is Personal Pronoun? (with examples)

A Personal Pronoun is a word that is used to simply replace the name of a person, thing, etc. It is one of the types of Pronouns.

Generally, Pronouns are mainly used to replace the name of anything (like person, thing, etc) in the sentence. In other words, it replaces Noun or Noun Phrase.

So, Personal Pronouns are mostly used in 4 cases. Those are,

Some of the Personal Pronoun examples are I, we, him, her, us, them, they, his, her, etc.

Here are some Personal pronoun example sentences to refer to and understand the concept.

Personal Pronoun in terms of Person (Point of View)

Previously, we had discussed the 4 cases in which the number one case is about the person. Now, we will learn in detail about it.

So, it is used based on the Person’s Point of View (POV) such as,

For example, I and we.

Here, “I” represents the self-view of the person.

For example, he, she, it and they.

The 2nd case is about the number of people, things, etc.

So, it is used based on the number such as one (Singular) and more than one (Plural) person, things, etc.

The 3rd case is about gender. So, it is used based on the gender of a person. This case is also used for things.

Note: To refer to a single thing, we commonly use “it” in the sentence. However, there are a few exceptions. We sometimes refer animals with he/him (or) she/her. This can also be used for,

Nominative Case is one of the cases used for Noun and Pronoun in the sentence. It is actually the subject of the verb.

Objective Case is another type of case in which it is used to refer to when a noun or pronoun is used as an object. Here, the object can be Direct, Indirect or Object of Preposition.

So, overall there are two types of Personal Pronouns used in the sentence. Those are,

We will learn about this in detail in the coming topics of this article.

Reference Table on Personal Pronoun (based on the four cases)

Here we are going to learn 4 different types of Personal Pronouns. Those are,

We had previously discussed Subjective Personal Pronouns which is also called Nominative Case. Let us recall the topic.

It usually indicates that the Pronoun is acting as the Subject of the Verb.

Here are the example sentences of Subjective Personal Pronouns.

We also discussed this topic previously, which is also known as Objective Case.

Objective Case is used for nouns and pronouns that function as objects in the sentences. There are three types of objects in it. Those are,

Possessive Personal Pronouns are used to represent who owns it and also refer to the owner of a thing, place, etc.

Some of the examples are his, hers, mine, its, our and theirs.

Summary (What is Personal Pronoun?)

So, here is the summary of what we had learned till now.

I hope that you understood the topic “What is an Indirect Object?”. If you still have any doubts, then comment down below and we will respond as soon as possible. Thank You. What is Pronoun in English Grammar? Pronoun Definition and Examples: The pronoun is a part of speech which replaces the repeated Noun in the sentence. For example, he, she, it, we, they, you, etc. The concept of the Pronoun is introduced so that the Noun can be replaced, and it has the same function as… Reflexive Pronouns Definition in English? A Reflexive Pronoun is a type of pronoun that is used to refer to the verb of the subject with the object’s verb within the same sentence. Here the word “Reflexive” means towards self and the sentence should have either noun or pronoun as “the subject” and “the object”. So,…